Welcome to the Digital Review Sheet for IA3! I hope this style, with the attached resources, will prove very helpful to you. You are required to answer all of the below questions, either on loose leaf or typed and printed. Since the numbers restart for each section, you are required in include on your answer paper the heading of every section of questions, as well as the title of this page as the title of your sheet.

I tried to link as many resources as I could right here within the review sheet for your convenience. However, all materials, including PowerPoints, readings, and worksheets can be found on my website, mrcaseyhistory.com. You can click on your class and skim through the lessons.

I have given you some but not all of the relevant Global Textbook summaries as a simple study resource. You can always find all those summaries on the Summaries page on my website, but I am linking them below in the relevant sections.

Don’t forget to refer to your own class notes as well, and your answers to the online homeworks, which you should be able to find in your email.

You should ABSOLUTELY also check out my Instagram @globalkhan for past review in the story highlights (look for multiple highlight tabs with Unit 5 and 6 in the title) as well as NEW REVIEW STORIES to be posted between now and the test, which give you a chance to ask questions and have responses posted for everyone. These will also be saved in the above-mentioned highlights, so if you miss them, that’s where they’ll be!

Freeman-Pedia as a Quick Review Source!

This website has some really great visuals that summarize concepts from the time period. It’s all on one page so just scroll down it and see what might be helpful! Below is a sample just to give you an idea! 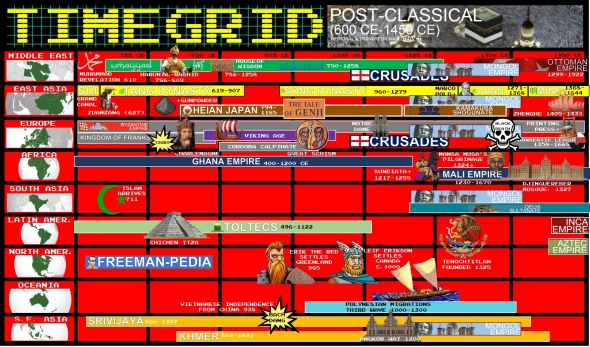 Class Materials:
The Legacy of Justinian

Islam and the Muslim World

PowerPoints:
Islamic Origins
Spread of Islam and Muslim Rule
Division and Unity in the Muslim World

PowerPoints:
Viking Raiders and Traders
European Feudalism and the Manor Economy PP
The Role of the Medieval Church

PowerPoints:
The Crusades Begin
Perspectives on the Crusades
Growth of European Monarchies PP

Post-Classical China and its Neighbors

Class Materials:
Tang and Song Inventions
Cultural Change in Tang and Song China AND The Response to Buddhism in China DBQ
Degrees of Chinese Cultural Influence Stations
Spread of Buddhism in East Asia

Global Textbook/Summaries:
Chapter 12: Spread of Civilization in East and Southeast Asia (500–1650) (NOT Section 2)

World of the Indian Ocean Basin

Caption contest. Go!
How I talk to people who don’t take Coronavirus seriously. #IKnowWhatHuntsYou #LOTR If you’re stuck inside with nothing to do, I highly recommend watching these movies, or even better, read the books. I think the books especially really give you a sense of the long, drawn out, increasingly difficult journey, as well as the need for fellowship during dark times.
“SOCIAL DISTANCING!” —Donald Trump ... John Oliver explains what this tweet by the President (yes, that was the whole tweet) means and why it’s so important on @lastweektonight. #socialdistancing #flattenthecurve #covid_19 #covid19 #coronavirus
I hope to see you all in the Spring. I am very relieved to hear this news, but let’s remember why this is happening. This is not a vacation. Be safe y’all. I haven’t heard any details yet so don’t ask me anything beyond this for now. If I hear anything useful I’ll let you guys know. Not sure what kind of remote learning system they may try, but I’ll keep you in the loop. You guys are already ahead by being connected with me on here. You know I’m ready to get creative to keep you educated and historically minded. I’ll try my best to post on here regularly as well to share history for those who are motivated to continue learning. Let’s hope we are able to open safely again in April. We don’t know. It could be longer. Remember, the goal is to #FlattenTheCurve. Also remember that this move will carry with it a lot of difficulty. Remember to regularly check in on your family, friends, neighbors, and classmates (virtually of course). We are in this together. We need to support each other during this difficult time. Stay safe. Love you guys.
Roman Empire (Red) vs Mongol Empire (Blue): Size Comparison
It’s a different time right now. #CoVid19 #Coronavirus
#AngkorWat #KhmerEmpire #SoutheastAsia #Hinduism #Water #HydraulicEnpire
🕋 An incredible image. Swipe to see how it looks most of the time... CORONAVIRUS fears have sparked the closure of #Kaaba, as Saudi officials closed the doors of Islam's holy site for a deep clean. . . From Express.co.uk: “The building in the centre of the Great Mosque of Mecca has been shut down and is completely empty of worshippers as Saudi Arabia works to prevent the spread of the deadly COVD-19 virus. Dr Yasir Qadhi, Islamic scholar, posted on Twitter: “Subhan Allah, the Ka'ba is empty, the tawaf has stopped as the authorities clean the Ḥaram because of the coronavirus scare. May Allah protect all of us!”” . . Honestly, I’m glad that they are taking these precautions. I wonder what will happen during Hajj season, if the virus is still a major threat by then. Will the entire pilgrimage of millions of people (who probably already dropped thousands of bucks to book their trips) be canceled? During the time of the Black Death in the 13th century, the Hajj pilgrimage, with Muslims coming from all over the world to Makkah (Mecca), May have contributed to the spread of the disease to new lands. Of course, long-distance trade and business was ongoing at that time. Today, it is of course so much more the case. The more interconnected we are, the more interdependent we are, the more vulnerable we are to destabilizing forces like epidemic diseases. These are the challenges we must face in our globalized world.
Globally, democracy is in decline. Only 22 countries were classified as full democracies. Our country was not one of them.
How the Crusades began... #PopeUrbanII #AlexiusI #Seljuks #Crusades #FirstCrusade #Clermont #Jerusalem #Constantinople #CatholicChurch #Pope #Papacy #Medieval #MedievalHistory