Study Tunes Unit Two: The Mesopotamians by They Might Be Giants & I’ll Make a Man Out of You from Mulan 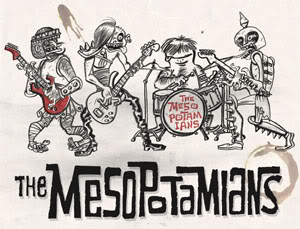 You all know very well that I like to play background music for you while you do group work or debate prep. Well, in that spirit, here are few songs to close out Unit Two that I think you’ll appreciate. The first song is “The Mesopotamians” by They Might Be Giants. The music video is pretty weird. I have no idea why they made the characters look like that, but each “band member” name is associated with which actual Mesopotamian group. Sargon was the ruler of the Akkadian Empire that conquered Sumer, Hammurabi of course was the famous Law-Code-enscribing king of Babylonia, Ashurbanipal was a ruler of the Assyrian Empire, well-known to you for their skills with iron weapons and advanced military tactics, and Gilgamesh was the semi-historical Sumerian ruler made famous in The Epic of Gilgamesh.

The second song is “I’ll Make a Man Out of You” from Mulan, the song about the Han soldiers going to fight the Huns. These two songs sort of tie together the Unit, I thought. Hope you enjoy them as you study!